A Celebration of Memories in Wadebridge

What better way to draw to a close our highly successful ‘Landmark Travels’ Project than with a heart-warming gathering to showcase the personal memories of people from Wadebridge and surrounding area.

<
►
>
Screening of digital stories in Wadebridge

The room was full at the John Betjeman Centre in Wadebridge last Saturday as people gathered to watch a selection of the digital stories we had made from the recordings we had collected earlier in the year. Those who came were treated to short glimpses of the ever-changing lifestyles and landscapes described in these films. They heard about Ada Martin’s time as a housemaid at Pencarrow House, about Joe Skinner’s annual summer camp and Margaret Thompsoms memories of the vibrant community of Wellington Place. These in turn prompted a variety of touching, funny and revealing stories from the audience and a humorous insight into local rivalry between the towns of Wadebridge and Bodmin! Did you know that newlyweds in Wadebridge were honoured as they left by train for their honeymoon by a series of exploding detonators placed by staff on the railway tracks?

To end the screening we showed a very moving story from Ada Martin who sadly passed away after we recorded her memories. Here is her wonderful message- 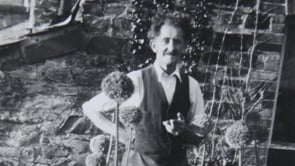 The screening of the digital stories was the prelude to the exhibition now showing at Wadebridge and District Museum ‘Remembering Wadebridge’. This provides another opportunity to watch the short films, including those not yet viewed, and to check out some fascinating archive photos and memorabilia.

Ada Martin… ‘Working at Pencarrow House’ & ‘Look out for others’
Joe Skinner… ‘Summer Camp’
Margaret Thompson…. ‘Wellington Place’
May Garland… ‘I promise to do my best’

We would like to thank everyone who welcomed us into their homes and gave up their time to share their memories with us. Also to Wadebridge and District Museum for their support over the months and refreshments at the screening. The ‘Landmark Travels’ Project was a partnership between Storylines, the Institute of Cornish Studies and the Cornwall Heritage Trust. It was funded by the Heritage Lottery Fund and Cornwall Heritage Trust.